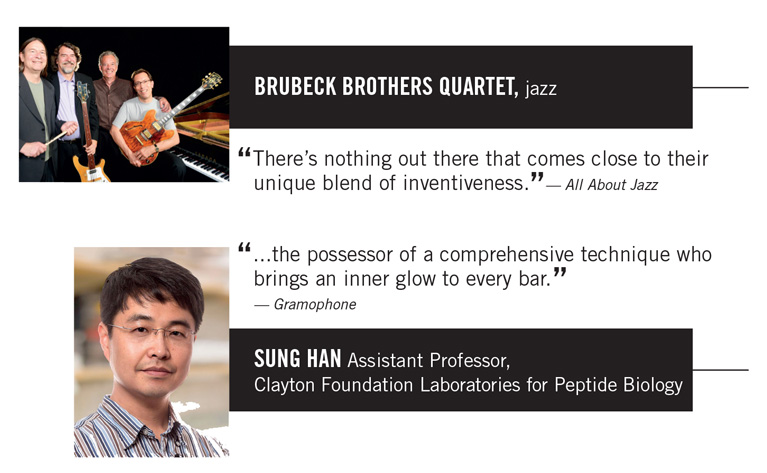 Sold out
Chris and Dan Brubeck have been making music together practically all their lives. Drummer Dan and bassist, trombonist and composer Chris cut their first record together in 1966—nearly a half century ago. They’ve subsequently played a variety of styles in a number of different groups, as well as with their father, jazz giant Dave Brubeck, and with their own Brubeck Brothers Quartet. With Dan and Chris as the foundation, guitarist Mike DeMicco and pianist Chuck Lamb, complete this dynamic quartet. They perform at concert series, colleges and jazz festivals across North America and Europe, including the Newport, Detroit, Montreal, Playboy/Hollywood Bowl and Monterey Jazz Festivals. The Quartet’s last cd, LifeTimes was a hit on the Jazz Week radio chart where it made the Top Ten list as one of the most played jazz recordings of the year.

“The playing that takes place on LifeTimes— the wondrous combination of swing, melodic majesty, masterful arrangements and a truckload of truly inspirational solos–just adds a vibrancy and color to songs I thought I knew and loved on a deep level. It turns out that there was still plenty of depth I could have discovered. I just needed someone to point the way and that is exactly what these four gentleman have done through LifeTimes.” — Seattle Times

These versatile musicians also collaborate with orchestras all across the US, as well as internationally, including performing with the Singapore Chinese Orchestra and the Russian National Orchestra. With Chris Brubeck’s compositions as a vehicle, the BBQ has joined with chamber groups to collaborate with musicians from the St. Paul Chamber Orchestra, the Philadelphia Orchestra and the Russian National Symphony Orchestra.

Although the Quartet’s style is rooted in “straightahead” jazz, their concerts reveal an inherent ability to explore and play odd time signatures while naturally integrating the influences of funk, blues and world music. The group’s creativity, technique and improvisation can be heard in their uncompromising music, which reflects their dedication to melody, rhythm, culture and the spontaneous spirit of jazz.

Grammy-nominated composer Chris Brubeck continues to distinguish himself as a creative force and multifaceted performer on fretless bass, bass trombone and piano. An awardwinning writer, he is clearly tuned into the pulse of contemporary music. The respected music critic for the Chicago Tribune, John von Rhein, calls Chris: “a composer with a real flair for lyrical melody—a 21st Century Lenny Bernstein.”

Born in Oakland on May 4, 1955, Dan Brubeck was a highly energetic child who found his calling at the trap set. Mentored by two consummate polyrhythmic masters, Joe Morello and Alan Dawson (at the Berklee College of Music), he was working professionally before he finished his teens. Over the years, Dan was featured on nearly a dozen albums with his father and toured widely with the Dave Brubeck Quartet, including many appearances with the world’s leading orchestras. He’s been an integral part of the various Brubeck bands, including the Darius Brubeck Ensemble, Two Generations of Brubeck, and the New Brubeck Quartet. He’s toured internationally and recorded three widely played albums with his electric jazz group, The Dolphins, and co-led the Brubeck LaVerne Trio with his brother Chris and pianist Andy LaVerne. A stylistically versatile musician, he’s toured with acts ranging from The Band and David Benoit to Gerry Mulligan and Paul Desmond. He’s recorded with jazz guitar legend Larry Coryell, singer/songwriter Livingston Taylor, jazz/pop singer Michael Franks,and pioneering blues guitarist Roy Buchanan.

Dan’s drumming style is both mesmerizing and unparalleled, and his distinctive, and astonishingly textured drum solos have received standing ovations all over the world! His uncanny sense of timing and use of odd time signatures, combining melodic phrases with polyrhythms that often stretch far beyond the bar line, has earned the respect of many jazz critics worldwide. His mastery of complex rhythms has led to his reputation as one of the most talented and creative drummers in jazz!

Mike DeMicco, guitarist and composer for the Brubeck Brothers Quartet, has toured extensively worldwide since 1980. He grew up in the arts colony of Woodstock, New York, immersed in blues, jazz and rock music. His musical diversity has since led him to work with celebrated artists in many genres. For 10 years, he performed and recorded with the acclaimed electric jazz quartet The Dolphins, featuring Dan Brubeck; he has also recorded with Warren Bernhardt, Peter Erskine, Michael Franks, and James and Livingston Taylor, among many others. Mike has performed on the internationally syndicated PBS series Jazz In America; at the major European jazz festivals; and with Dave Brubeck, Jack DeJohnette, Larry Coryell and Nick Brignola, to name a few. He was also featured guitarist on W.C. Handy Blues Award-winner Rory Block’s “Tornado” tour of the US and Europe, and is currently touring and recording with rising vocal star Lindsey Webster. Mike’s CD, As The Sun Sets (Blue Forest Records), showcases eight original compositions and features Warren Bernhardt (piano), Jay Anderson (acoustic bass), Rob Leon (electric bass) and Peter O’Brien (drums).

“DeMicco’s guitar is the perfect blend of soul, polish and technique.”— JazzTimes

Chuck Lamb has been a member of the Brubeck Brothers Quartet since 2002 and is not only an exciting and emotive pianist in his own right, but also a prolific composer of jazz, fusion, classical and world music. As part of the Brubeck Brothers Quartet and with his own groups, Chuck has performed at numerous renowned venues around the world, including most of the major jazz festivals and in such international venues as Tchaikovsky Hall in Moscow with the Russian National Orchestra and with the Singapore Chinese Orchestra in Singapore.

Chuck began his professional music career at the age of 10, playing drums and percussion in upstate New York. At 15, Chuck switched to piano and began composing his own music. Several years later, Chuck co-founded the exciting jazz fusion group Dry Jack, which Rolling Stone History of Music cited as one of the premiere, cutting edge fusion bands of the electric jazz movement.

In addition to being a professional touring musician and prolific composer, Chuck is also an accomplished and creative music educator. He has taught workshops and clinics across the United States, as well as in Japan, Singapore and Russia, where he taught a class in composition and improvisation to students from ages 6 to 70 and enjoyed the novel experience of teaching the entire class via a Russian translator. In fall 2017, Chuck was honored to become an adjunct professor at Skidmore College, teaching jazz piano, ensembles and improvisation. 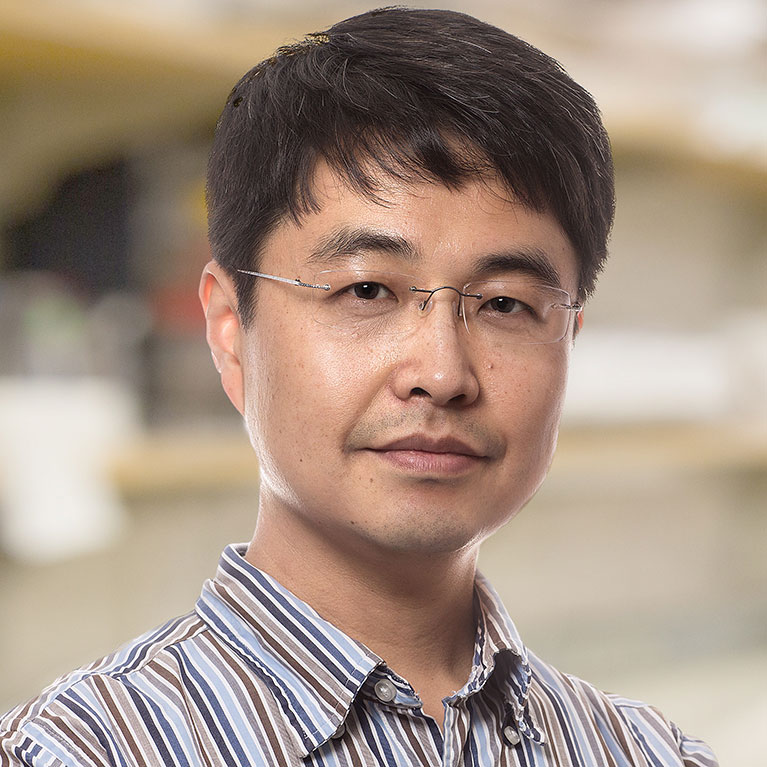 Recent discoveries show that each type of neuron has its own chemical markers that determine its functional role in the brain. Sung Han examines specific markers, called neuropeptides, that influence the brain’s alarm system. The dysfunction of neuropeptide signaling has been directly linked to a variety of human disorders, ranging from neuropsychiatric disorders to metabolic syndromes. Although hundreds of neuropeptides are identified, their functional roles in the brain are not fully understood. To better understand how neuropeptide signaling encodes and processes sensory threats, Han is unraveling individual neural circuits using the latest techniques in the field of neuroscience, including optogenetics, chemogenetics, electrophysiology and in vivo and in vitro functional imaging techniques, among others. Understanding neural circuitry of the brain’s alarm system will provide insight for developing therapeutic interventions for a host of neuropsychiatric disorders with sensory abnormalities.