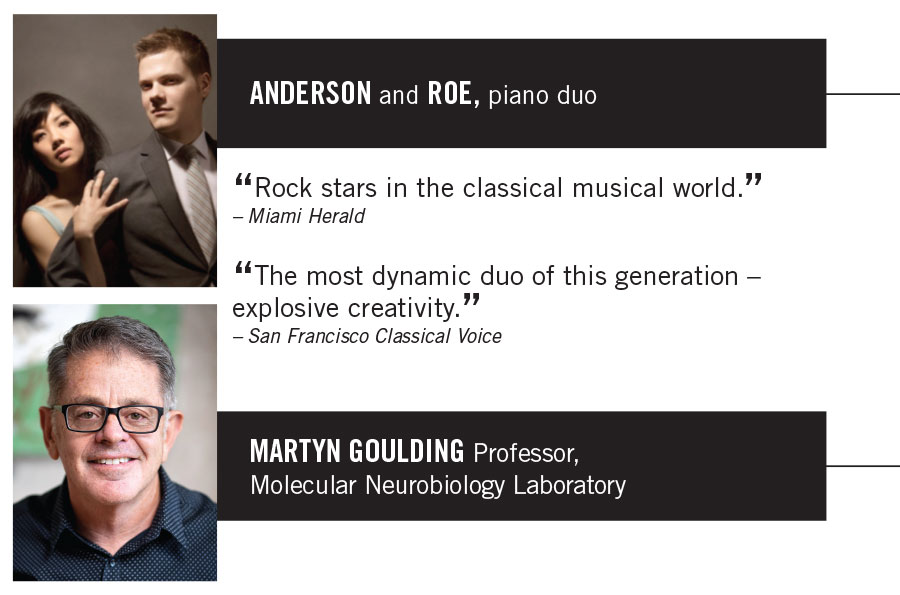 Due to the growing concern over COVID-19, the Salk Institute has decided to close the campus to all visitors and cancel or postpone events. Unfortunately, this means that this Salk Science & Music Series concert is cancelled.

We are taking this action as a preventative effort to protect the health of attendees and employees and hope you will understand this decision. Efforts will be made to reschedule this event at a later date; sign up below to be notified.

Known for their adrenalized performances, original compositions and notorious music videos, Greg Anderson and Elizabeth Joy Roe are revolutionizing the piano duo experience for the 21st century. Described as “the most dynamic duo of this generation” (San Francisco Classical Voice), “rock stars of the classical music world” (Miami Herald), and “the very model of complete 21st-century musicians” (The Washington Post), the Anderson & Roe Piano Duo aims to make classical music a relevant and powerful force around the world. During the 2019/20 season, their recital appearances span North America, Europe and Asia and their orchestral engagements include performances of Bach and Mozart concertos, as well as their own Carmen Fantasy for Two Pianos and Orchestra and Danse Macabre: Bacchanal for Two Pianos and Orchestra with the Boulder Philharmonic and MUSE/IQUE in Los Angeles. Other season highlights include a stint as guest hosts of NPR’s From the Top, the release of nearly a dozen new music videos, production on a film featuring the winning submission to their inaugural New Music New Video composition competition, and a multi-week residency at the Tippet Rise Art Center as recitalists, recording artists and filmmakers.

Anderson and Roe met in 2000 as freshmen at The Juilliard School and formed their dynamic musical partnership shortly thereafter. They have since toured extensively, with notable recitals in the United Kingdom, Switzerland, Germany, Austria, Italy, Estonia, Romania, Israel, Singapore, China, Hong Kong, Taiwan, South Korea, Japan, New Zealand and most major US cities, as well as in nearly every New York City venue imaginable, from Carnegie Hall to children’s hospitals. They have appeared at the Gilmore and Gina Bachauer International Piano Festivals; the Mostly Mozart and Styriarte Festivals; Cliburn Concerts; and the Grand Teton, Santa Fe, Chautauqua, Orford, Ventura, Skaneateles, Carmel Bach, and Minnesota Beethoven summer music festivals. Their past orchestral engagements include appearances with the orchestras of San Francisco, Vancouver, Rochester, Liverpool, Calgary, Hartford, Boulder, Chautauqua, Waco, and Winnipeg, among others, and with members of the Metropolitan Opera Orchestra. In 2015, Anderson & Roe premiered Brahms’ Double Concerto in their arrangement for two pianos and orchestra with the resident orchestra of Performance Santa Fe.

Anderson & Roe’s discography comprises five critically acclaimed albums; their latest release, Mother (SWR Music), features an eclectic range of music by Dvořák to Queen (in the duo’s original arrangements), and their albums on the Steinway Label—When Words Fade, An Amadeus Affair and The Art of Bach—have spent dozens of weeks at the top of the Billboard Classical Charts. Anderson & Roe’s Emmy-nominated, self-produced music videos have been influential in shaping the 21st-century classical music video genre, and their oeuvre of over 50 music videos (including an experimental film of the entire Rite of Spring) has been viewed by millions on YouTube and at international film festivals. Their scores are published by Alfred Music on the “Anderson & Roe Duos & Duets Series” and by Awkward Fermata Press.

The duo’s innovative exploits have captured the attention of such media outlets as MTV’s Total Request Live, NPR’s All Things Considered and From the Top, APM’s Performance Today, PBS’ Texas Music Cafe, and BBC’s In Tune, as well as Gramophone, Clavier Companion, Listen, and Pianist magazines, and the Huffington Post. They are profiled in Nick Romeo’s book, Driven, and in 2017 they served as hosts for the 17-day medici.tv webcast of the 15th Van Cliburn International Piano Competition. In recognition of their singular vision for the advancement of classical music, they have been invited to present at numerous international leader symposiums, including EG (Entertainment Gathering), the Imagine Solutions Conference, Chicago Ideas Week, and Mexico’s Ciudad de las Ideas.

Anderson & Roe left an indelible impression at The Juilliard School, where they both earned their bachelor’s and master’s degrees. In 2006, given only two months to compose and prepare, they gave the world premiere of their own composition, Four Fantasies on Themes from Star Wars, replacing John Williams on Juilliard’s “Cinema Serenades” concert in Alice Tully Hall. Additionally, the two directed the groundbreaking project “Life Between the Keys,” a performance project that celebrated the unique camaraderie of Juilliard’s 2004 piano class and chronicled its experience in an all-American program of piano music. A live performance by the duo is featured on the Sounds of Juilliard album celebrating the school’s centennial year. 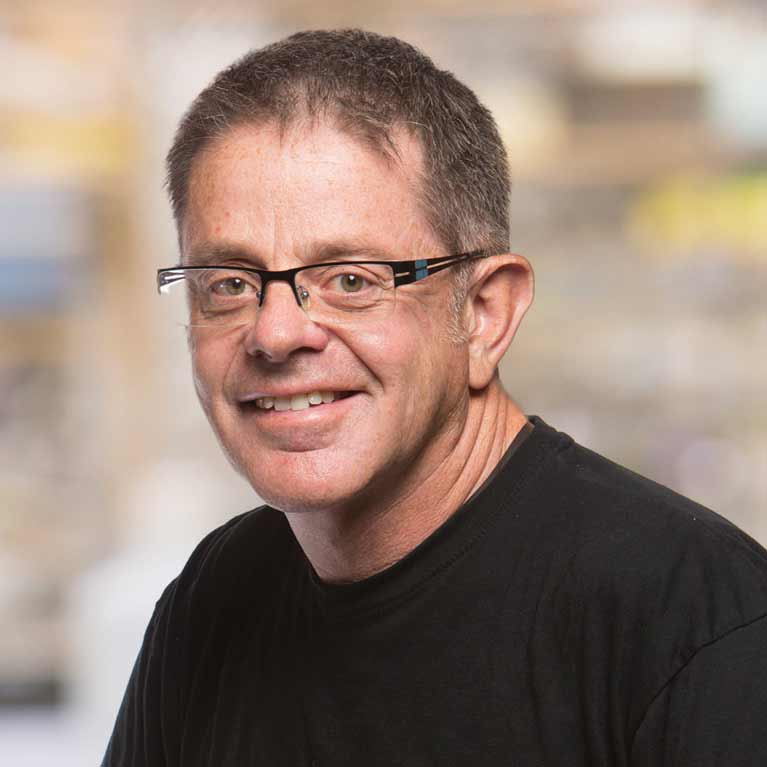 Martyn Goulding, the Frederick W. and Joanna J. Mitchell Chair and a professor in the Molecular Neurobiology Laboratory, studies the sensory and motor circuitry in the spinal cord that generates and shapes movement. He focuses on how interneurons transmit and relay sensory information from the skin and muscles to regulate protective reflexes, locomotion and dexterous movements. In addition to identifying and characterizing the central pattern generator neurons that generate these motor behaviors, his lab has mapped many of key pathways in the dorsal spinal cord that transmit the sensory modalities of light touch, pain and itch. His lab uses a combination of cutting-edge genetic, behavioral, neuroanatomical and electrophysiological techniques to decipher how sensorimotor circuits in the spinal cord are organized and how this circuitry is altered by spinal injury or by pathologies that lead to chronic pain and itch.