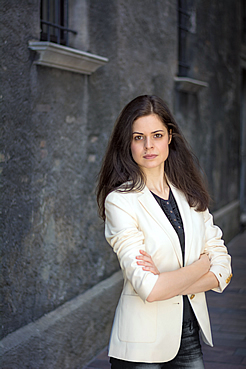 The international press describes Zlata Chochieva as the “possessor of a comprehensive technique who brings an inner glow to every bar…Poetic and pianistic command could hardly go further” (Gramophone), and as “a natural Rachmaninoff player, coaxing a darker sound from the keyboard and reveling in the big romantic melodies” (Miami Herald). Crescendo Magazine speaks of an “amazing easiness and extraordinary inner power”, and Piano News writes: “ In each piece, she seems to be telling a story which words are unable to express.”

At only five years old, Zlata made her first stage appearance, and she gave her debut with an orchestra two years later performing Mozart’s Concerto No. 17 at the Grand Hall of the Moscow State Conservatory. In 1997 she gave a full recital at Rachmaninoff Hall which was broadcast on Russian television and garnered rave reviews. Shortly thereafter she caught the attention of the legendary pianist and conductor Mikhail Pletnev, who invited her to play concerts with the Russian National Orchestra and to study with him as one of only two students at the time.

Chochieva has been regularly invited to perform at many important festivals in Russia, Sweden, Switzerland, and the U.S., including the Miami Piano Festival and the Lugano Festival “Il Progetto Martha Argerich”. Her performances have been broadcast on television and radio in Italy, Belgium, Spain, Germany, Poland, Russia, Denmark, Norway and the U.S.

Zlata’s discography includes two CDs with the Piano Classics label. Her recording of the Rachmaninoff Variations on a Theme of Chopin and the First Sonata received outstanding reviews in Gramophone, Fono Forum and Piano News.

Her recent disc of the complete Chopin Etudes with the same label has been nominated for the  German Record Critics Award (Preis der Schallplattenkritik) and was selected as Editor’s Choice in Gramophone. Critics have already placed this recording among the most noteworthy  versions of the Chopin Etudes: “It is certainly one of the most consistently inspired, masterfully  executed and beautiful sounding versions I can recall.” (Jeremy Nicholas, Gramophone); “This  recording goes straight into the premier league, together with Perahia and Pollini.”  (Musicalifeiten.NL) Her recently released album of the complete Rachmaninoff EtudesTableaux has also received glowing reviews from the press.

Highlights of the current concert seasons include recitals in Paris Philharmonie, Berlin  Philharmonie, a return to the Miami Piano Festival, as well as participation in the Moscow State  Philharmonic’s project “Stars of the 21st Century”, a nationwide event which includes recitals  and concerts in the most important cultural centers in Russia.

Born in Moscow in 1985, Zlata Chochieva began her musical education at the age of four. From  2000­2003 she continued her studies under the tutelage of Mikhail Pletnev, and in 2012  graduated with honors from the Moscow State Conservatory. From 2012­2014 she attended the  Postgraduate Course at the Mozarteum University of Salzburg in the class of Professor  Jacques Rouvier, who in 2013 appointed Zlata as his Assistant.

Edward Stites is an assistant professor in the Integrative Biology Laboratory. His research interests are in cancer systems biology.

Dr. Stites’ research investigates cell signaling networks implicated in diseases such as cancer with an emphasis on understanding the role of network behaviors on pathology. Mathematical and computational models capable of determining unexpected behaviors that arise from known properties of the proteins in the signaling network play a prominent role in his research. Modeling is used to develop new insights and to formulate hypotheses that are tested experimentally. His long-term research goal is to develop a systems-level understanding of cell signaling in disease that enables precision medicine.